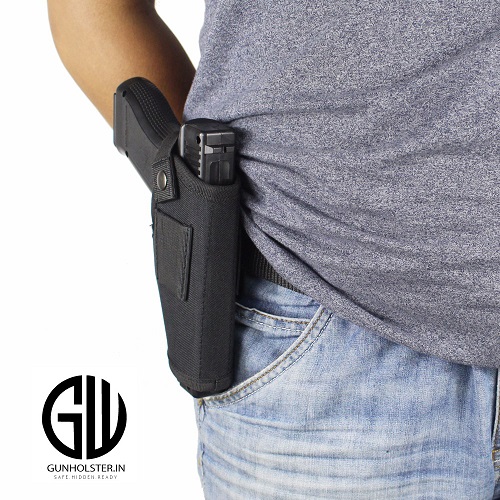 You want to carry a gun, but which holster is best for you? Check our complete guide to every holster type.
Belt Holsters: Outside the Waistband (OWB)
Think cowboys. An outside-the-waistband (OWB) holster attaches to your belt, and the whole assembly of gun and holster rides outside your pants, generally on your strong hand side. Some OWB holsters ride on the opposite side so the user draws across the body.
You’ll encounter different methods of attaching an OWB holster to your belt, pants or skirt. Most have loops through which you thread your belt. Others, called paddle holsters, rely on a large “paddle” backing that slips between your body and the outer clothing layer. Most are designed with small “nubs” that are designed to catch on the bottom side of your belt so the holster doesn’t come out with the gun when you draw.
Belt Holsters: Inside the Waistband (IWB)
As the name implies, inside-the-waistband (IWB) holsters fit between your pants and body, sometimes in front of your hip bone, sometimes on it, and sometimes behind. In this category, we can also include appendix-carry holsters, which are placed up front rather than on your side.
IWB Holsters can be made of leather, Kydex, or both. I particularly like hybrid-style holsters, which use a large leather back panel for stability and comfort against your body, while a Kydex gun pocket keeps the gun stable and locked in place. Kydex is also thinner than leather, so the width of stuff inside of your belt is minimized.
Shoulder Holsters
If you’re old enough to remember Don Johnson in his Miami Vice role, you’ll know this one. A set of (usually) leather straps crosses over your shoulders and back, allowing a gun holster and spare magazine carriers to hang on opposite sides of your body. Since the straps are over your shoulders and meet in the back, the idea is that you can cover your gun by wearing a sports coat or jacket.
Ankle Holsters
Smaller guns, such as J-Frame revolvers and compact semi-automatic pistols can be carried in an ankle holster. These rigs generally use a wide neoprene or padded elastic strap with a holster pocket attached. You wrap the band around your ankle, and the gun is carried on the inside of your support side leg.
Clothing Holsters
As millions of Americans have decided to arm themselves, holster companies have gotten exceptionally creative. You’ll find compression undershirts and shorts with holster pockets. You’ll find jackets and vests with concealed-carry gun and magazine pockets ready to go. You’ll even find pants with break away holster pockets and holsters that attach to brassieres.
Purse and Bag Holsters (Off-the-Body)
Many new female concealed carriers default to purse carry. Why? Women’s wardrobes vary widely, so a one-style carry approach, such as an IWB holster, doesn’t adapt well to all situations. Plus, carrying in a purse or bag is ever so convenient. If you choose this carry method, by all means use a model with a dedicated holster pocket, because if you carry a gun in the main compartment of a standard bag, loose items can work themselves into the trigger area. Besides, who knows where your gun will end up if deposited in the same compartment as keys, wallet and breath mints? Remember the primary needs of a safe gun holster, which are listed at the beginning?
Pocket Holsters
The advent of ultra-compact revolvers and pistols has made pocket carry a viable option. When I say “pocket,” that most commonly refers to your front pants pocket, but it could work well in a jacket pocket too. It’s a convenient way to carry, but, as with any other method, there are pros and cons to consider.
Closing Thoughts
These are the basic types of holsters. We’ve not even scratched the surface of the concealed carry holster universe (I wrote an entire book just on concealed carry methods and holsters.)
Which one is right for you? Concealment and access are extremely important, of course, but there’s a much bigger factor at play: The reason that you’re carrying the gun in the first place. All carry methods are not created equal, and having a gun on or close to you doesn’t mean that it will be useful in the self-defense situation you may encounter.
We take a close look at some of those situations, and how different holsters affect your reaction to them here.